Many people or even other companies believe that they will become successful by hitching their wagon to a successful company. That’s the worst nightmare of any company as I believe nothing could be further from the truth.

Just like any other company, we constantly struggle with “how to know if somebody’s going to be successful?”. In fact, as we have cool products, it’s even more difficult because people really believe Herculean’s success is “easy” to achieve. They don’t grasp how much hard work and suffering is required to be part of our team.

Nobody wants to hire people who will run into a brick wall eventually. It’s a waste of energy and if you hire too many unsuccessful people, it can even jeopardise a successful company. Believe me, I had my share too over the past 20 years.

So, can you know? We now use techniques like personality types and core talents and interviews with our core team and coaches to reduce the risk, but even then you can’t be 100% sure of a person because a lot depends on the person himself every single day. Unsuccessful people are pretty good in covering up for their bad habits. However, successful people have a great radar to discover the frauds out there (they just have to trust their radar, but that’s another topic). So my believe is:

Can unsuccessful people be coached into success? Probably, but as Georges Anthoon would say: I recently saw a post from my dear friend Bev Mileham, which is a pretty good comparison to help you discover who is successful and who isn’t:

So, are you successful? Have a Herculean day!

People who work with me on a daily basis know one of my firm believes: “the need for speed“. I can become quite “passionate” when things don’t go faster than I expected or when people don’t understand they can do things a lot faster than they think. Every day I make it my mission to speed up the way things go in my daily tasks, but also within our team.

I know…it can feel like a lot of pressure, but if I don’t give you pressure, I probably don’t believe you can grow any further, so stop complaining and deal with it. You would be surprised about the speed you can reach.

Here’s a very nice article that illustrates why speed is a great weapon in business.

Great article by Shawn Achor and Michelle Gielan in HBR.org on how to deal with secondhand stress. Observing someone who is stressed — especially a coworker or family member — can have an immediate effect upon our own nervous systems. Here are some remedies to improve your emotional immune system:

HERCULEAN, that's how I feel today

Scientists gradually begin to understand the wholesomeness of meditation: more compassion, better quality of life and reduced levels of stress, depression, anxiety, pain or insomnia. The American neuroscientist Sara Lazar spent the past years doing elaborate research on the effect. The most striking finding was that the brain actually changes after 8 weeks of meditating, as new grey matter arises.

The Washington Post had a fascinating interview with Dr. Lazar.

Dr. Lazar came to the conclusion that meditating can literally change your brain. Long-term meditators have an increased amount of grey matter in the insula and sensory regions, the auditory and sensory cortex compared to a control group.

It’s well-documented that our cortex shrinks as we get older – it’s harder to figure things out and remember things. But in this one region of the prefrontal cortex, 50-year-old meditators had the same amount of gray matter as… 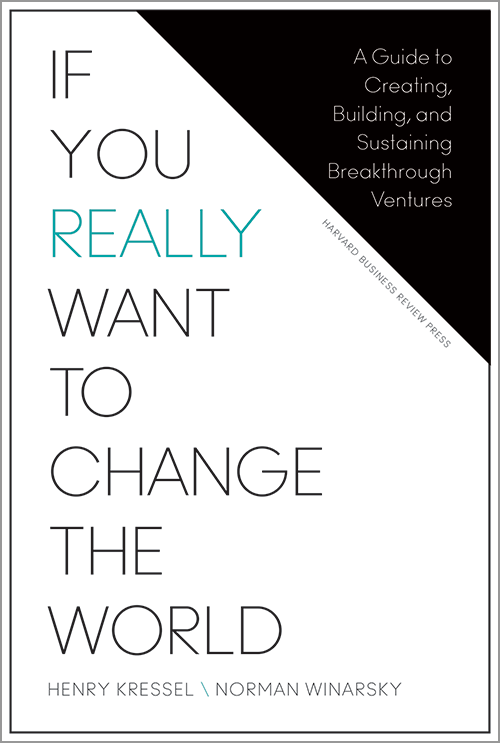 This one’s on my wishlist. Did anyone read the book already?

Silicon Valley’s latest trend for creating new ventures is based on trial and error: test market needs with new product concepts and a minimum amount of capital, expect that the product may not meet the market need, so fail fast and try another product with the hope that a product-market fit will eventually emerge.

But this fail fast, step-and-pivot philosophy is like taking a random walk in the forest without a compass. “If You Really Want to Change the World” is about helping entrepreneurs find true north.

Henry Kressel and Norman Winarsky–technologists, inventors, and investors with stellar track records–provide a guide for those who wish to create a market-leading company that will have a real impact: a disciplined and staged approach they have used to launch, invest in, and develop scores of highly successful companies. “If You Really Want to Change the World” leads entrepreneurs through the critical stages of venture development, from concept to acquisition or public offering to maintaining a rich culture of innovation in the company. It is a guide by innovators for innovators, with approaches that are practical and timeless. Drawing on the authors’ experiences as well as those of their partners from around the world, Kressel and Winarsky share the stories of their triumphs and misses, demonstrate their method in action, and inspire their readers in the process. There are more opportunities now than ever before to build breakthrough companies that touch millions of lives. If this is your goal, let this book be your guide to creating world-changing ventures.

Employees don’t need annual performance reviews to know how they stack up against their peers says Kris Duggan on FC.com. I couldn’t agree more. At Herculean, we believe in three simple things when it comes to building breakthrough teams. They are based on The Orange Revolution:

When you practice open communication, everybody knows at all time how they are performing. They not only know it from their boss, but from all their peers. Read the complete article here.

“You’ve always been a high achiever—top of your class, captain of your sports teams, star performer at work. Now, you’re going to be managing a team of high-performers in a division of your company that everyone’s buzzing about. You’re confident that you can navigate this new challenge with characteristic success.”

You’re pumped. You set clear goals for yourself and targets for the division. You’re well aware that you’ll need to rely on your emotional intelligence skills to understand and work through your new team’s dynamics. You’re focused on achieving your goals and getting results… but before long, you’ve got problems. Your team doesn’t seem to be on board with your plan and they’re not delivering. Worse, they seem to be shutting you out. In desperation, you go to a few trusted mentors who tell you:

“You’ve inherited the cream of the crop. I’m not sure they even really need a manager, they’re that good and that motivated.”

“These are our stars. You noticed, I’m sure, that you’re the third new manager appointed in the past two years?”

It turns out it’s not so easy to manage ultra-smart high achievers — especially when you’re one of them.

Another milestone achieved: “The most popular Corporate Games event, the Daman Hercules Trophy will now debut in Abu Dhabi at the Zayed Sports City Stadium on 13 February 2016. After a number of successful events in Dubai, the organisers of the event will be launching in Abu Dhabi and this edition promises to be full of exciting, fun and unusual challenges for corporates across Abu Dhabi. The organisers are expecting more than 100 teams to participate at the launch of the Abu Dhabi edition.”

On November 11th 2015, we even organise the first Hercules Projects in the Middle East for 700 employees of one company in Abu Dhabi!

People in my team know what our mantra is to achieve our BHAG: Dream – Team – Focus – Network.

To build a breakthrough TEAM, I keep nagging about three keywords: WOW, Open Communication and Cheer. Three powerful words from The Orange Revolution that I find extremely difficult to implement. Average teams fail in at least one of these areas because:

These three words describe the difference between a group of individuals, a team and a breakthrough team.

I constantly look for means to explain to the team and to newbies what these three words actually mean to me. Here’s a great video from Robin Sharma about WOW.

Bottom line on how to turn a bad day around:

Have a Herculean weekend!